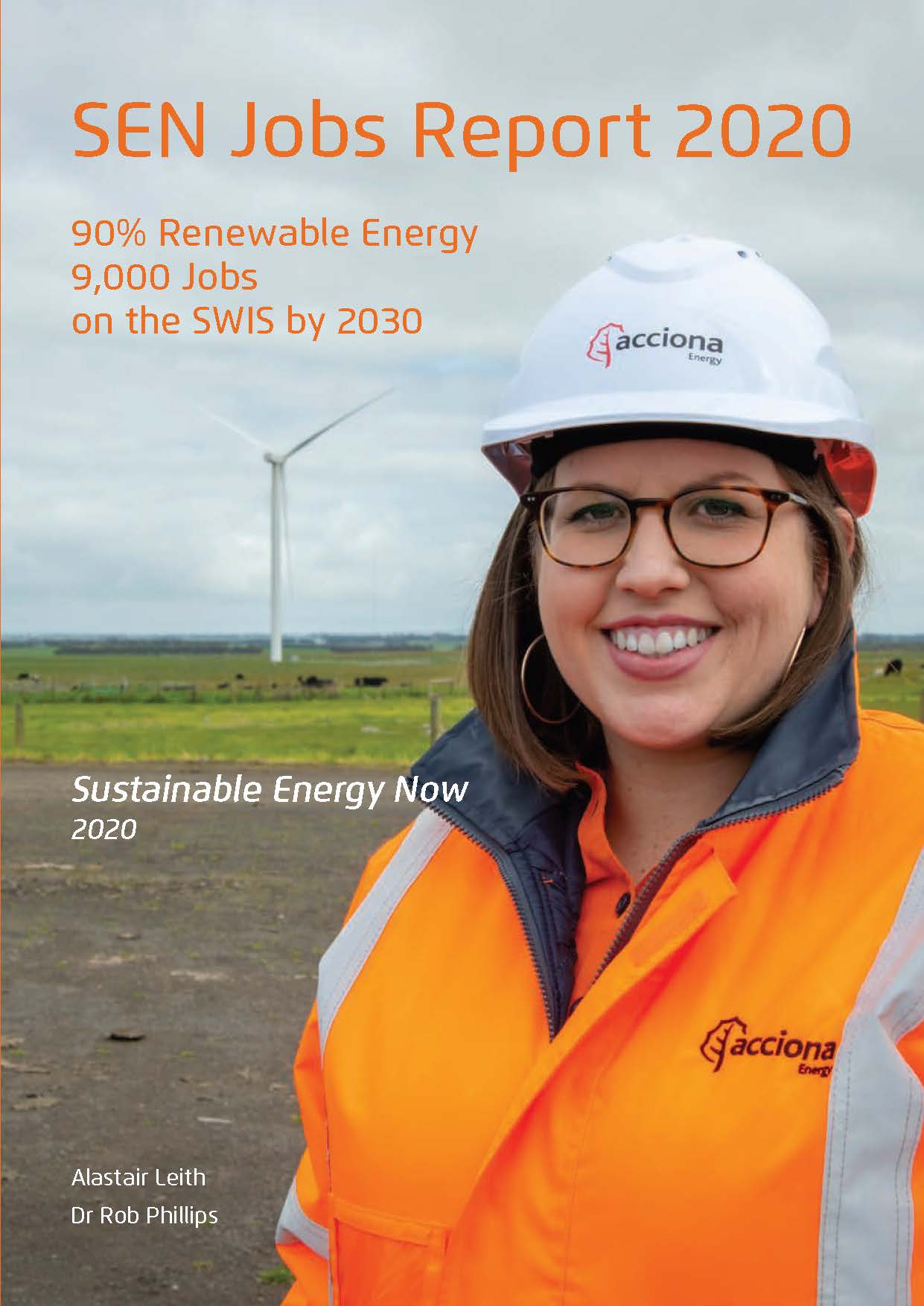 In September 2020 we published our SEN Jobs Report 2020.  This report examines the strong jobs potential of a transition from what is presently a coal and gas dependent SWIS grid to a 90% RE grid by 2030.

Leveraging the latest renewables employment research in this country commissioned by the Clean Energy Council who surveyed and interviewed their members and AIG members we are able to project reliable and contemporary employment outcomes around a transition to a largely renewables SWIS grid.

Our modelled transition to 90% RE by 2030 determined the following direct jobs:

There will also be jobs created from the closure and rehabilitation of existing carbon-based energy systems such as the Muja power plants.

Resources developments in WA have shown that the construction work for new projects has become an industry in itself. This analysis indicates that something as significant as the transition to high levels of RE will create a sustainable RE construction industry.

In the creation of this new industry, the WA Government has the choice of a hands off “industry will decide approach” which is likely to involve significant delay followed by problematic booms and busts in RE construction employment, or a managed approach. We have assumed a more rational managed approach where there is a steady flow of new jobs through an informed and well directed government policy. The WA Government Energy Transformation Taskforce is key to providing the strong guidance needed. The majority of jobs considered in this report are related to new wind and solar energy as well as pumped hydro and storage. All of them create significant new jobs:

Should the transition be slower as a result of ineffective policies or a delayed response, then a similar level of new jobs will still be created, but over a longer timeframe.

The jobs referred to in this report are direct jobs only. New jobs create indirect and induced jobs through multiplier effects, but these have not been taken into account in this report. The resources industry tends to assume the creation of indirect and induced jobs in its reporting so this important factor needs to be considered when making comparisons with other jobs reporting.

The scenario we consider in this report excludes the significant upsurge in energy demand expected to flow from a substantial transition to electric vehicles and fuel switching from gas to electricity in domestic, commercial and industrial applications. These factors are expected to significantly increase electricity demand and therefore RE jobs over those presented in this report.

The transition of an electricity system to high levels of RE results in clean energy. There is an increasing demand for clean energy in existing and new industries. This has also not been directly taken account of in the figures in this report and provides considerable additional upside.

The objective was to deliver a comprehensive, fully costed, clearly articulated Renewable Energy (RE) roadmap, to create a cleaner, and ultimately cheaper, energy future for the towns and communities of the broader West Kimberley region. The report was derived from research by SEN energy consultants and the use of the modelling software SIREN and Powerbalance, developed by SEN members.

The outcomes are summarised in the Key Findings, and the Executive Summary, based on the full Kimberley Clean Energy Roadmap Report.

The Kimberley Clean Energy Roadmap analysed the costs of various RE scenarios and compared them to fossil-fuelled alternatives in a range of locations.

A Renewable Energy roll-out could include:

and make reduced use of existing fossil-fuelled generation for backup.

One of the infographics from this report summarising the report findings:
(this infographic is available in the Key Findings document as high resolution vector graphics ready for print):